Skip to main content
OK
ISPE.org uses cookies to improve site functionality and to provide you with a better browsing experience.
By using our site or clicking on "OK", you consent to the use of cookies.
Technical
May / June 2018

Biopharmaceutical manufacturers are under pressure to reduce costs and increase the robustness and flexibility of their manufacturing operations. Optimization of downstream purification steps is required to achieve these goals. In-line concentration of dilute solutions prior to various downstream unit operations can result in both cost and time efficiencies.

This study investigated the performance and scale-up possibilities for in-line concentration on a mAb production platform using a patented SPTFF technology approach designed by Pall Life Sciences for a simplified control scheme with a fixed retentate resistor (Figure 1). The study was built on behalf of Novo Nordisk.

This study was conducted using an in-line concentration module with a 30-kilodalton (kDa) Delta-regenerated cellulose membrane. This holder-less preassembled device, based on new SPTFF technology, is equipped with a built-in fixed retentate resistor that supplies a set backpressure to the retentate side, achieving a target volumetric concentration factor (VCF) of 2x–5x or higher.4All that is needed to operate the system is a feed-pressure source (i.e., pump or pressurized vessel) and a feed pressure-measurement device. The staged flow path is a series-and-parallel arrangement of T-series cassettes in a 3-2-1-1 configuration, referred to as “four in series.”

The effective total area of the membrane was 0.065 square meters (m2). The system was equipped with a Quattroflow 150S pump and three Pendotech PrePS-N-000 pressure sensors.

The same module was used for each test after cleaning with 0.3 M sodium hydroxide (NaOH) at room temperature. Normalized water permeability was measured before and after each session; observed data indicated that no significant fouling occurred and that the cleaning was effective. The module was equilibrated with respective buffer before each test.

To determine the capability of in-line concentration for each process step, feed-flow excursions at different feed concentrations were conducted while monitoring the VCF, retentate and permeate flows, and mAb concentrations. During these tests, the system was placed in total recirculation mode for the product. Feed flow was adjusted using the pump speed controller. The permeate, retentate, and feed flows were assessed using a scale with a stopwatch. A relative density of 1 gram per milliliter (g/mL) was applied to convert the gravimetric data to volume values. The feed and retentate concentrations were measured using a NanoDrop 2000c full-spectrum ultraviolet-visible (UV-Vis) spectrophotometer and the appropriate assay. Full single-pass operation was also evaluated for the volume reduction before the virus filtration (P2) and the final concentration after UF/DF (P3).

Figure 1: Schematic Of A Mab Production Process. The Capture Step Uses Affinity Chromatography; The Polishing Chromatography Is An Ion-exchange Chromatography. This Configuration Was Tested For In-line Concentration In Steps P1, P2, AND P3. 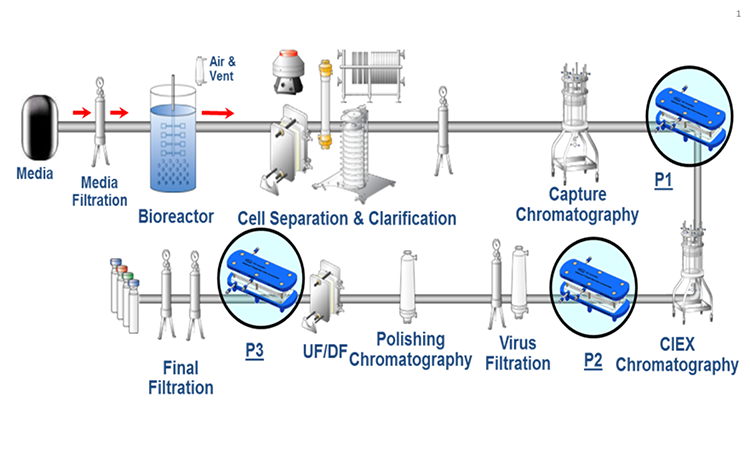 The capability of in-line concentration to reduce the process volume after the capture step was investigated by Novo Nordisk because the company wanted to increase its storage capacity; a volume reduction of at least 3x was required to do so. Volumetric reduction just prior to the ion-exchange step was expected to optimize this step with shorter process times and/or reduced column volumes, both of which have the potential to reduce production costs.

Typically, the eluate pool of the capture step has a very low salt concentration and consequently a low conductivity (2.9 mS/cm for the sample used in this study). Because salt increases mAb solubility, it may also affect protein concentration at the membrane surface. A decrease in the concentration polarization boundary layer thickness improves the ultrafiltration mass transfer coeffcient.6 A single-pass concentration step, operating primarily in the mass-transfer-controlled region where the permeate flux is independent of the pressure,1,2 improves mass transfer and can result in higher permeate flux and an improved capacity for concentration.

To demonstrate the effect of improved solubility and to increase the mass transfer, the capture step pool conductivity was adjusted to 20 mS/cm by adding NaCl to achieve a concentration of 150 mM. For a mAb solution containing 150 mM NaCl, a feed flux of approximately 36 LMH provided a VCF of nearly 5.5x. The eluate pool without salt achieved a VCF of 2.5x at the same feed flux.

Possible aggregate formation caused by microcavitation induced by pumps and valves during product concentration was also investigated. Aggregate formation may be increased due to multiple passes in conventional tangential flow filtration (TFF).3 Samples were collected during the process and analyzedvia size-exclusive high-performance liquid chromatography for high-molecular-weight protein (HMWP) content. No increase in HMWP content was observed after concentration of capture pool samples with and without salt. 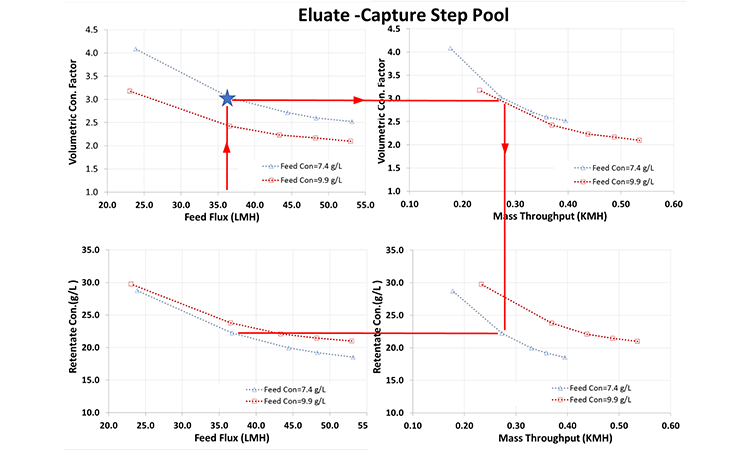 Using the results obtained for the feed-flux excursion experiments, throughputs and feed fluxes required to obtain desired VCF and retentate concentrations were calculated for volume reduction of a 200-L chromatographic capture step pool with a concentration of 7.4 g/L. It was found that this volume could be reduced in 1.6 to 2.5 hours using an in-line concentration module with an effective filter area of 3.5 m2. In-line concentration also increases freezing storage capacity and creates opportunities to optimize the subsequent cation-exchange step without the need for a large hardware investment. 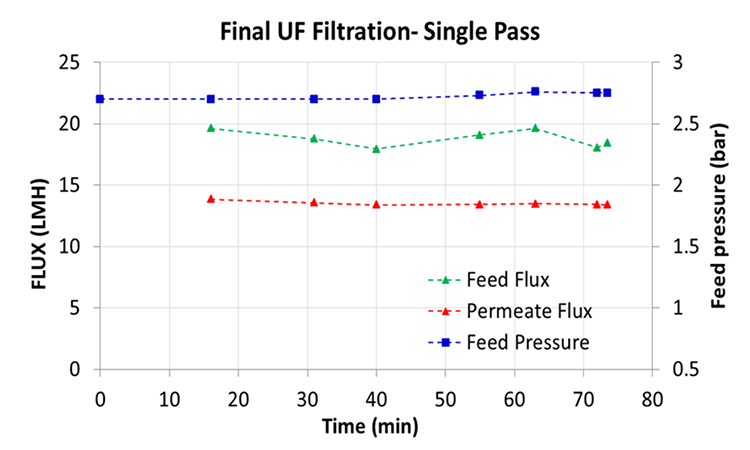 The ion-exchanger step pool had a product concentration of approximately 10 g/L and a conductivity of 16 mS/cm. To test the in-line concentration capabilities and process robustness, feed-flux excursions at three different pool concentrations (8.4, 10.4, and 12.1 g/L) were evaluated. For a product pool concentration of 10.4 g/L, a VCF of 3x was achieved using a feed flux of 57 LMH and a throughput of 0.59 KMH, approximately twice that observed for the capture step pool. The higher throughput can be explained by the higher conductivity of the ion-exchange pool.

Next, a single-pass run was conducted with a feed flux of 57 LMH, using the ion-exchange pool with a starting concentration of 11 g/L to evaluate the stability of the in-line concentration process and determine the product recovery. Stable filtration without fouling was observed. Product recoveries of approximately 99.6% and 98.9% were obtained with and without (three hold-up volumes) system flushing, respectively.

Although the same mAb was used, the mass throughput for the ion-exchange pool was nearly twice that of the capture step pool using a higher feed concentration. The main difference was the pool conductivity. To demonstrate that a higher pool conductivity (16 mS/cm) allows for a greater concentration factor, an additional test was performed using a product pool diafiltrated with WFI to a conductivity of 1.6 mS/cm. In this study’s experimental setup, in-line concentration produced a sample with lower conductivity.

With the diafiltrated sample (1.6 mS/cm), similar VCFs were obtained with a significant decrease in the mass throughput compared with the higher conductivity sample. In fact, it was not possible to achieve a VCF of 3x for the 1.6 mS/cm sample, even at a significantly lower feed flux. This can be explained by a decrease in mAb solubility at lower conductivity. Lower mAb solubility may lead to a higher protein concentration at the membrane surface, possibly increasing the concentration polarization layer thickness and decreasing the UF mass-transfer coefficient. Using an in-line concentration module with a single-pass concentration step that operates largely in the mass-transfer-controlled region (where the permeate flux is independent of the pressure) decreases the mass-transfer coefficient and can therefore decrease the permeate flow, limiting the VCF that can be achieved.

Expected throughputs and feed fluxes required to obtain the desired VCF and retentate concentrations for volume reduction of a 200-L ion-exchange pool (10.4 g/L) were calculated using results obtained for the feed-flux excursion experiments. This volume could be reduced by a factor of three within 5 hours using one module with a filtration area of 0.7 m2, or 1 hour using a module with a filtration area of 3.5 m2.

For final concentration, Novo Nordisk may currently perform up to three steps on the same UF system. The mAb is first concentrated to approximately 50 g/L, then diafiltrated with a suitable solution, and finally concentrated to > 100 g/L. A standard pilot UF system processes initial volumes from 600 L and provides final volumes of 12 to 15 L (VCF 40–50x). Such volume constraints may lead to poor product recovery and low yields, requiring product over-concentration.

Feed flux excursions at feed concentrations of 49.4 g/L and at 59.2 g/L were conducted. The samples were previously concentrated and diafiltrated using a suitable buffer solution on the existing UF system. The feed flux, VCF, feed concentration, retentate concentration, and mass throughput were calculated or determined as described for the capture step.

For the two feed materials (of around 49 and at 59 g/L), the target retentate concentration was achieved at respective feed fluxes of 20 and 20.9 LMH. Once again, controlling in-line concentration via the feed flux provided robust dampening for small variations in the feed concentration (±10%).

A single-pass run was performed using a feed concentration of 50 g/L and a total volume of 1.51 L with a 0.065 m2 module to test the stability of the in-line concentration module and determine the product recovery (Figure 3). Single-pass operation was stable without any indication of permeate flux decreases or feed-pressure increases during the 75-minute run, indicating no membrane fouling.

A product recovery of 96.7% was obtained after flushing with an equivalent of two-system hold-up volumes—a significant yield improvement when compared with the current process. 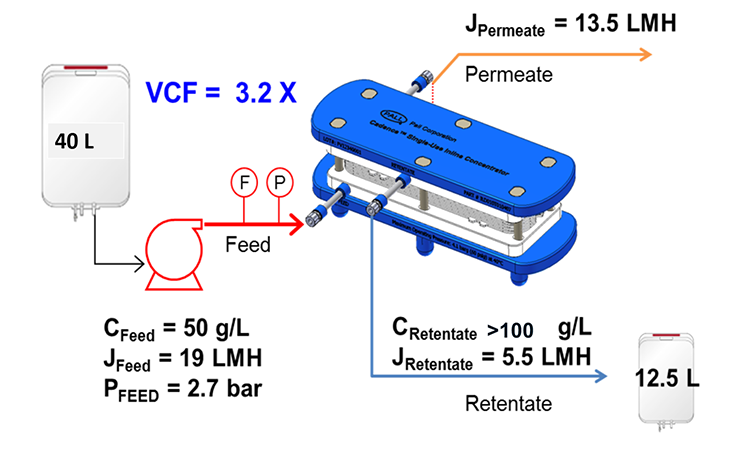 Based on the test data from the single-pass run at a concentration of 49.6 g/L, the filter area for processing a batch volume of 40 L with a mAb concentration of approximately 50 g/L to a final concentration of > 100 g/L was calculated to take 3 hours using an in-line concentration module with a 0.7 m2 membrane area—a potential improvement of the final UF yield compared to a conventional TFF system (Figure 4).5

For the tested mAb, the in-line concentration process performed in the present study reduced the capture step pool volume by a factor of 3x or 4x at respective feed fluxes of 36 to 22 LMH, meeting Novo Nordisk’s requirements. To concentrate 200 L of the capture step pool starting from approximately 7.4 to 29.6 g/L within a reasonable processing time, an in-line concentration module with an effective filtration area of 3.5 m2 would be required. The use of single-pass in-line concentration at this stage of the process increases binding capacity and creates an opportunity to optimize the subsequent ion-exchange step without a large hardware investment.

The ion-exchange pool was reduced by a factor of 3x with a feed flux of 57 LMH using in-line concentration, also meeting Novo Nordisk’s requirements. Concentration of the 200-L capture step pool from approximately 10 to 34 g/L can be achieved within 5 hours using an in-line concentration module with an effective filtration area of 0.7 m2 or 1 hour with a larger module (3.5 m2 membrane area). The reduction in volume of the ion-exchange pool may permit cost and processing time reductions in the virus filtration and subsequent polishing chromatography steps.

Notably, the in-line concentration performance of this study’s experimental setup was affected by the conductivity (salt concentration) of the chromatographic pools. At the same feed flux, adding salt to increase the capture step pool conductivity to 20 mS/cm increased retentate concentration to nearly twice that without salt. Conversely, removing the salt from the ion-exchange pool via DF significantly reduced concentration. 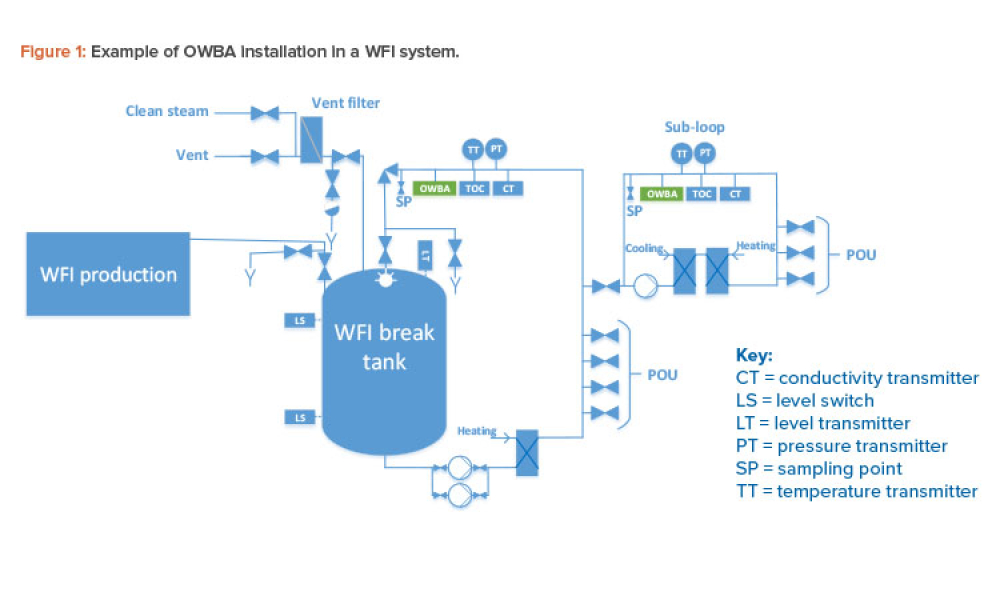 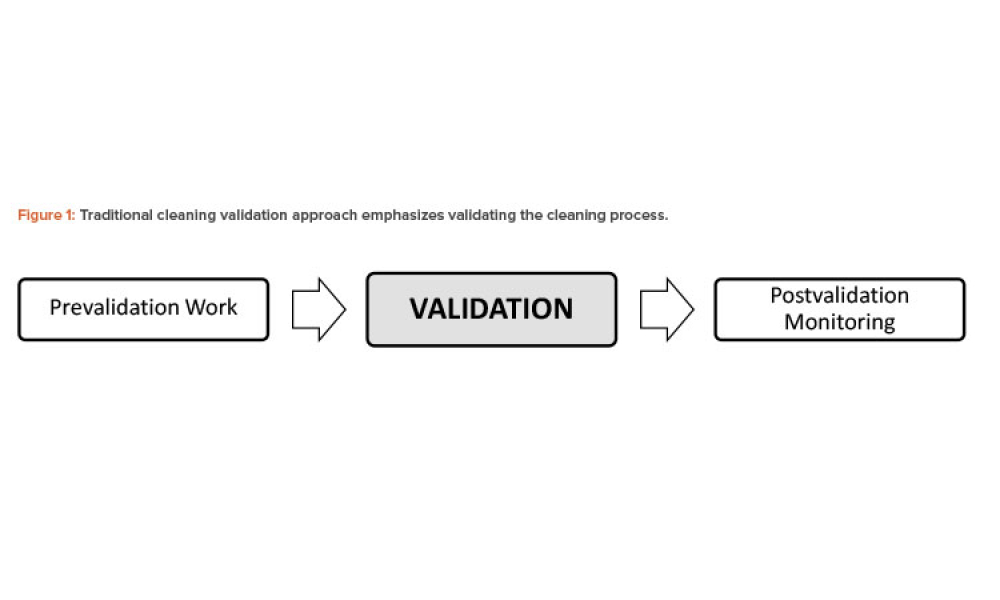 Technical
Cleaning Validation Program Maintenance in a Process Life-Cycle Model
1 January 2021
The process life-cycle model, as discussed in the US FDA guidance on process validation, is a significant change in how we view validation.US Food and Drug Administration. “Guidance for Industry. Process Validation: General Principles and Practices.” January 2011.... 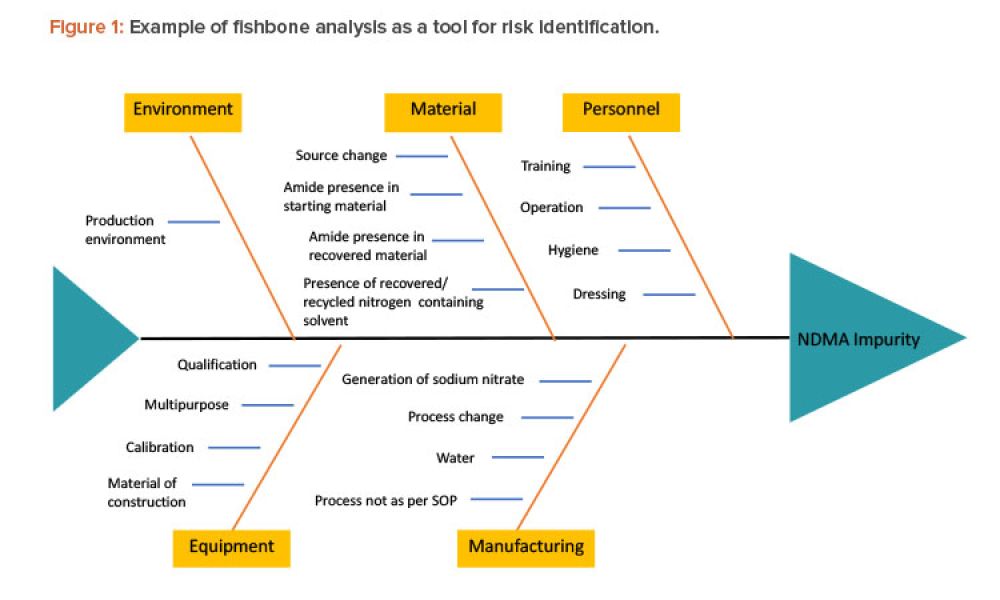 Technical
Quality Risk Management to Address Product Impurities
1 January 2021
Recently, recalls of angiotensin receptor antagonists, particularly valsartan, and warning alerts about N-nitrosodimethylamine (NDMA) impurities in drug substances such as ranitidine and metformin have demonstrated the urgent need for manufacturers and regulators to control impurities throughout...