Skip to main content
OK
ISPE.org uses cookies to improve site functionality and to provide you with a better browsing experience.
By using our site or clicking on "OK", you consent to the use of cookies.
Technical
September / October 2021

Cleanrooms and controlled contamination environments are increasingly being used across many industrial sectors, including the pharmaceutical industry. An important issue is the operating cost associated with cleanroom energy consumption and, consequently, the identification of applicable energy containment measures. This article reviews pharmaceutical cleanroom calculations for non-unidirectional airflow against energy consumption with known sources of contamination and type of air diffusion used. It proposes alternative cases to compare potential economic savings from applying energy-saving measures proposed by ISO 14644-16.1

Pharmaceutical cleanrooms can consume up to 15 times more energy than commercial building systems, with more than 50% of electricity being consumed by plant HVAC cleanroom systems.2 This level of energy consumption is driven by the high air change rates required to ensure the air quality of pharmaceutical production.

Typically, there are two ways to control airborne contamination: a displacement system with unidirectional airflow (UDAF) or a system providing dilution, non-UDAF. Because systems that use UDAF systems have very high airflows, they are not considered here.

When designing a cleanroom with non-UDAF flow, it is important to ensure:

The energy efficiency of the cleanroom, including the HVAC system, is subordinate to the reliability and performance of the pharmaceutical process. During the design phase of the cleanroom, the extent of the contaminant source is unknown. To define the airflow rate, designers often rely on industry guidelines. This choice can lead to oversizing the HVAC system, which results in high capital and operating costs.

ISO 14644-16, Part 16, “Energy Efficiency in Cleanrooms and Separative Devices,”1 prescribes a set of recommendations for energy efficiency in cleanrooms and the optimization techniques applicable in every stage of cleanroom life, including airflow rate design.

The following methods can be applied to reduce energy consumption in cleanrooms:

Many cleanroom regulations and standards do not specify air changes and leave it to the project designer to analyze and define these values, which are important cleanroom design parameters. However, research of regulations and standards documents found a guidance value of 20 air changes per hour (ACH) and a guidance time of 15–20 minutes for cleanup (also called recovery) time. (Table 1 shows the recommended values of air changes across various standards.)3 ,5 ,6 ,7

The World Health Organization (WHO) 2019 technical report for nonsterile drugs states, “The number of air changes or air-exchange rates should be sufficient. A guidance value is between 6 and 20 air changes per hour.” It further outlines that manufacturers should establish “how much time it takes for a room that is out of its classification to return within the specified class,” which is often referred to as cleanup or recovery time, and offers a guidance period of 15–20 minutes.7

In the latest revision of the EU GMP,4 the indication on minimum air changes was removed, but the guide retained the requirement of a “cleanup period” of 15–20 minutes.

The ISPE Baseline Guide, Vol. 3, Sterile Product Manufacturing Facilities7 makes explicit reference to the ISPE Good Practice Guide: Heating, Ventilation, and Air Conditioning.8  The latter publication defines the air changes to be applied during the conceptual design phase with the intention to revise and reduce them in the next phase—detail design—when more detailed information about process operation and personnel (number of opera-tors, type of garments worn) will be available.

Where P is power in watts and Q is flow rate in m3/s.

Where Qs is flow rate (m3/s); D is the rate of emission of particles or microbe-carrying particles (MCPs) from sources of contamination (counts/s); C is the limit of particles/m3 or MCPs/m3 in the environment, and ε is ventilation efficiency.

Due to the uncertainty of the data at the design stage, the standard suggests adopting a compensation factor, expressed in paragraph 6.3.3 as follows:1

Several studies regarding the sources of contaminant emissions were carried out by Ljungqvist and Reinmuller. In an interesting article, Romano and colleagues9 evaluate emissions from personnel, determine the main source of contamination, test different types of clothing worn by operators, and simulate different movements of the operator in a cleanroom. Chapter 5.2 of ISO 14644-16 establishes that “the required cleanroom garment levels should also be specified in the URS since they play a vital role in controlling particulate contamination.” 1 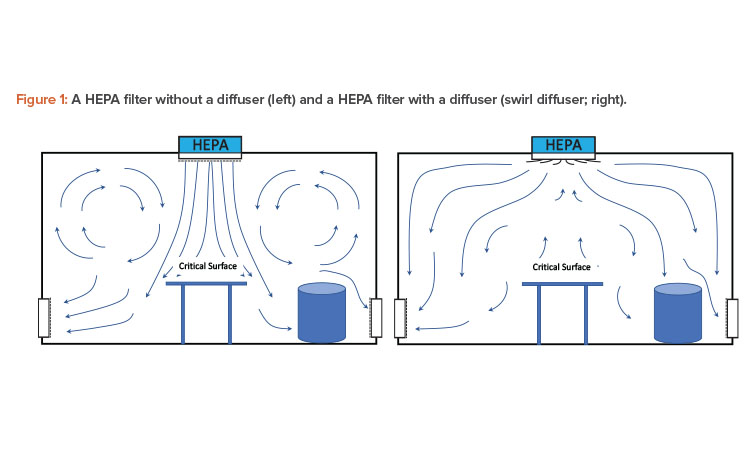 Where Tn is the nominal time constant, equal to 1/N (room air changes), and Ai is the air age at measuring point, equal to 1/ni (local time changes).

Then the value of ACE is calculated as:

The CRE ventilation efficiency is calculated as follows:

Though the ASHRAE standard defines how to measure and calculate the ACE value, there is no standard for the CRE value.

The CRE coefficient is used when the contamination comes from a precise, fixed source. The CRE index gives information about the ability of the ventilation system to control the contaminants emitted from a specific source but does not provide any information about the efficiency of the cleanroom's ventilation system, and it cannot be used to predict the level of airborne contamination that could be reached in the cleanroom.

Considering that the source of contamination in a cleanroom is not always located at a fixed point (for example, the operators in cleanroom), the suggestion is to use the ACE index to calculate the airflow rate.

ISO 14644-16 Appendix A.2.2 states that, “in the majority of cleanrooms, the main contamination problem is caused by personnel who move freely about the room. In that situation, the aim should be to ensure that sufficient contamination-free air reaches the critical location(s) to ensure the required concentration of contamination.”1

The ACE index depends on the type of air diffuser. Figure 1 shows a HEPA filter with and without a diffuser. (ISO 14644-16 defines a diffuser as a “device placed on inlet air supply terminal to improve distribution of incoming air with room air. A mesh grille or a perforated screen is not considered to be a diffuser.” )1

In a diffusion air system with a HEPA filter without a diffuser, most of the air is supplied directly under the HEPA filter, where the cleanliness level is greater than in the rest of the room. Accordingly, the ACE index under the filter shall be greater than 1, whereas in the rest of the room it will be less than 1. In this situation, the air diffusion shall not be homogenous with consequent nonhomogeneous particle concentration in the cleanroom, and nonhomogeneous room volume temperature. The nonhomogeneous room temperatures may cause discomfort for operators and, more importantly, may lead to uncontrolled air currents in the cleanroom, increasing the risk of product contamination.

In summary, in a cleanroom with non-UDAF, the supply airflow is calculated with equation 1, where the ACE index is determined with consideration given to:

It is also worth considering Eaton’s analysis of cleanroom contamination measurements,16 where, after verifying the contamination class of the room according to ISO 14644-1 (2015 version),17 it was found that the contamination value was above the limit at a point. Following this, the ACE index was verified at each point of the cleanroom, and at the point where the contamination was very high, the ACE index was much lower than 1, meaning there was bad air distribution in proximity of a source of particle emission [16]. In conclusion, it is reasonable for the calculation of the airflow to consider an ACE value of 0.7 when the air is supplied in the cleanroom with high-induction diffusers and is extracted through floor-level return.

Having defined the cleanup period, this equation can also be used to calculate the airflow for an air lock, material, or personnel.

Note: The higher air change shown in the table (13.2 ACH) is lower than the minimum US FDA–required ACH (20 ACH).5 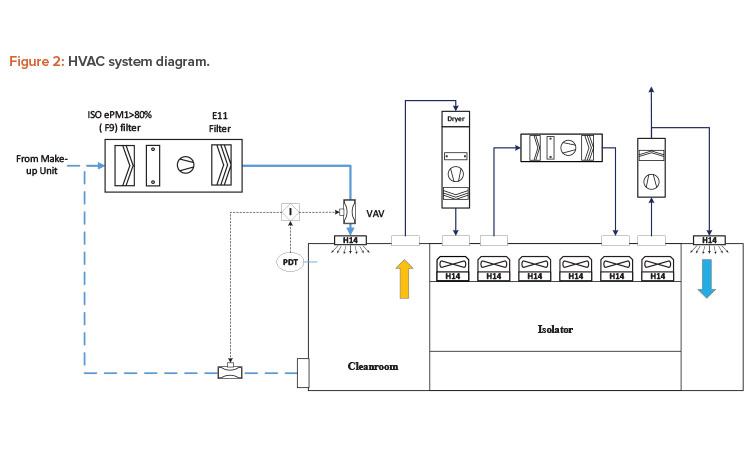 It is common for cleanrooms’ HVAC systems to be in continuous, 24/7 operation, even during nonoperational (at-rest condition) hours when a reduction in airflow rates would allow energy savings (unless, of course, the room cleanliness is compromised).

Table 3 shows the estimated annual energy and cost savings of a cleanroom designed to reduce the airflow rate during the at-rest period.

In Chapter 7 of ISO 14644-16, there is a focus on the cleanroom parameter, in particular on the room pressure that “should be maintained to pre-vent ingress of contamination from the surrounding area into the cleanroom or clean zone.”1 This requirement is consistent with the Chapter 53 of the EU GMP Annex 1,3 which states, “A filtered air supply should maintain a positive pressure and an airflow relative to surrounding areas of a lower grade under all operational conditions and should flush the area effectively.” Therefore, the HVAC system and relevant pressure control loop should be designed to avoid any peaks of room pressure out of the limit, positive or negative, even when the cleanroom is transitioning from operating mode to reducing mode, or vice versa.

One strategy to reduce the airflow rate could be to smoothly adjust the set-point values of the HVAC system’s variable air volume (VAV) air valves and combine the airflow tracking with the room pressure sensor that, if necessary, adjusts the offset of the airflow track to keep the room pressure differential at the desired level. The supply and return VAV air valves must be selected considering the accuracy of the flow measurement and relative errors.18

Figure 2 presents an example of a cleanroom pressure control for a filling room with isolator; the VAV system has been carefully selected to control the room pressure in all phases of the isolator operation.

Annex B of ISO 14644-161 lists the energy-saving opportunities, with the different opportunities organized by stage of implementation:

Annex C of ISO 14644-161 states that “a careful assessment of the impact and consequences of any proposed energy optimization change should be carefully addressed in the context of the fundamental principles of establish control and then demonstrate control.” It further outlines that assessment factors should include contaminants; people variability and uncertainty (people are a highly variable source strength of contamination; and people density, gowning, and cleaning are significant factors to consider); and process variability. Also reviewed and considered were Annex D, “Benchmarking: Energy Performance Indicators for Cleanrooms,” and Annex E, “Useful Measures to Minimize Excess Heating and Cooling Losses or Gains.”

High operating costs for a cleanroom are mainly due to the HVAC system. Most cleanrooms currently in operation were planned and built following de-sign criteria that were defined some years ago and were consistent with the production and plant technologies available then.

*Less-stringent indoor conditions can be applied once it has been verified there is no risk of
discomfort to operators and no impact on production process.

Over the years, significant progress has been made in process technology. The pharma industry is increasingly moving toward single-use equipment, fitting, and tubing; functionally closed process steps that are isolated from the surrounding cleanroom air; and more efficient localized protections (isolation technology) for open processes. Better-performing garments have been developed and significantly reduce the emission of particles and MCPs. Operating procedures have also improved, simplifying the work of operators, increasing use of electronic batch records, implementing paperless documentation, and reducing the shedding of particles. 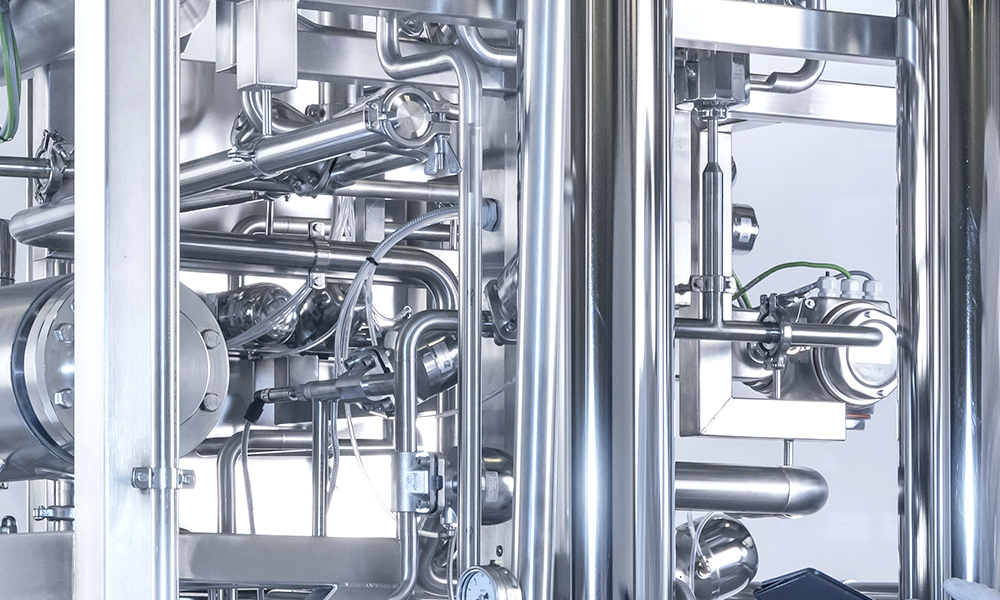 Sponsored Content
Modernization of a Downstream Production Plant
1 November 2022
From the delivery and integration of several skids to upgrading a downstream production suite, ZETA was ultimately responsible for a full-blown EPCM (engineering, procurement, and construction management) project quadrupling the scope of the original order. In spite of the significant increase in scope, the tight schedule was met as dictated by the planned production shutdown window. The ZETA... 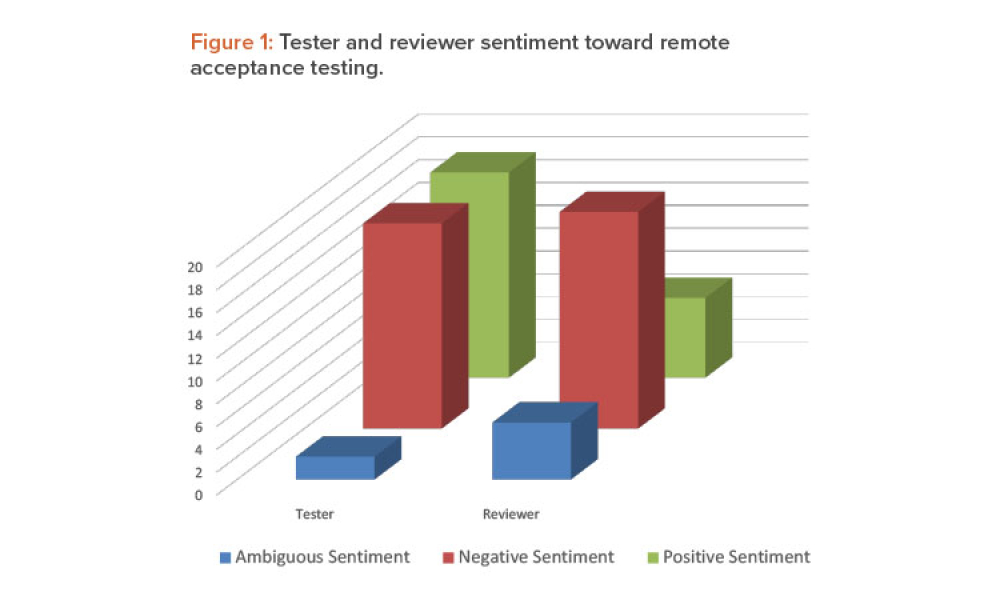 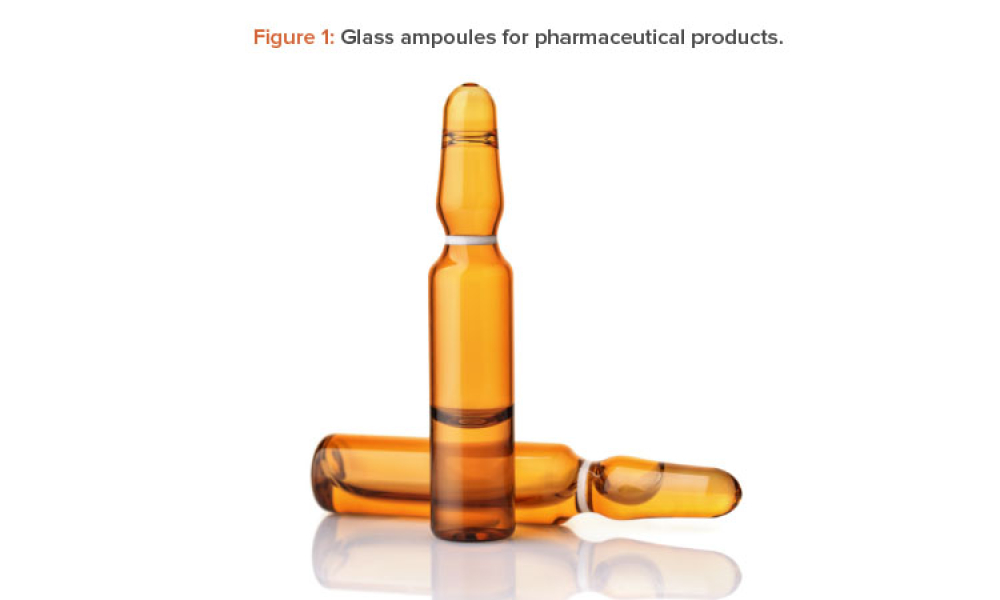