Skip to main content
OK
ISPE.org uses cookies to improve site functionality and to provide you with a better browsing experience.
By using our site or clicking on "OK", you consent to the use of cookies.
Technical
September / October 2020

Parametric studies on process conditions provide valuable insight for early-stage bioreactor design and process development. The advantage of computational fluid dynamics is that it enables rapid and cost-effective simulation of various conditions and provides detailed visual data that can complement or exceed experimental methods. Furthermore, individual parameters within CFD simulations can be varied with precision to facilitate design optimization with results interpreted at a level that is often masked by natural variation in physical testing.

Our modeling approach incorporated the homogeneous multiple size group (MUSIG) model to account for multiple sizes of bubbles, bubble breakup, and bubble coalescence. This model assigns the same velocity to the different bubble size groups in the bioreactor. This essentially means that small bubbles will have the same velocity as large bubbles even though, in reality, different sizes of bubbles have different terminal rise velocities. For air bubbles in a water-type liquid environment, the MUSIG model is appropriate for bubble sizes in the approximately 1 mm to 17 mm range.

Using the formulas from Talaia1 and liquid and gas densities of 993.5 kg/m3 and 1.65 kg/m3, respectively, the terminal rise velocity for air bubbles ranging from 1 mm to 17 mm is 0.15 m/s (1 mm) to 0.61 m/s (17 mm). The terminal velocity of the largest bubble can be approximately four times that of the smallest bubble. In practice, for these gas-sparged vessel mixing setups, most bubbles cluster within a tighter size range than the size range in which the MUSIG model applies. In addition, other studies have compared the inhomogeneous and homogeneous MUSIG models for vessel mixing with the homogeneous model, providing good results against experimental data.2

There are several theories for calculating the oxygen mass transfer coefficient, kL. Sarkar and coauthors3 used the following equation:

Others have used different mass transfer formulas, as shown in Equations 2, 3, and 4:4

Petitti and colleagues5 state that the constant in front of \(\sqrt{D_0}\left(\frac{\epsilon_L\ \rho_L}{\mu_L} \right)^{1/4} \) is sometimes replaced with one that is tuned with experiments; this was the approach taken in our study. In Table 3 of Ranganathan and Sivaraman,2 it is the eddy cell theory, with a constant of 0.4, that provided the best kL estimate against experimental data. We initially used this same 0.4 constant in our study to solve the models; then, the constant was adjusted so computational fluid dynamics kLa (see equation 5) matched experimental data for the benchmarking case (for each of the four different setups). The kLa constant for the other two simulations was then updated to that of the benchmarked kLa constant, and the percent difference between computational fluid dynamics and experimental kLa was determined.

The volume-averaged mass transfer coefficient is the product of kL and the interfacial area, a, as shown in equation 5:

The following assumptions were made in our study:

We used the following conditions for this study:

The initial bubble size out of the sparger was taken as uniform (a typical computational fluid dynamics approach for an air-sparged bioreactor) with a size that was calculated from equation 6.3

A total mass flow rate was specified at the sparger holes. The volumetric airflow rates provided in Table 2, later in this article, were referenced to a temperature of 0°C (32°F) and pressure of 1 atmosphere, representing normal flow conditions (European standard). The appropriate mass flow rate was determined by multiplying the volumetric flow rate by the air density at 0°C and 1 atmosphere of pressure, which is taken to be 1.295 kg/m3. The following is an example of this calculation:

where P is the absolute pressure, Pa, and T is the air temperature, K. 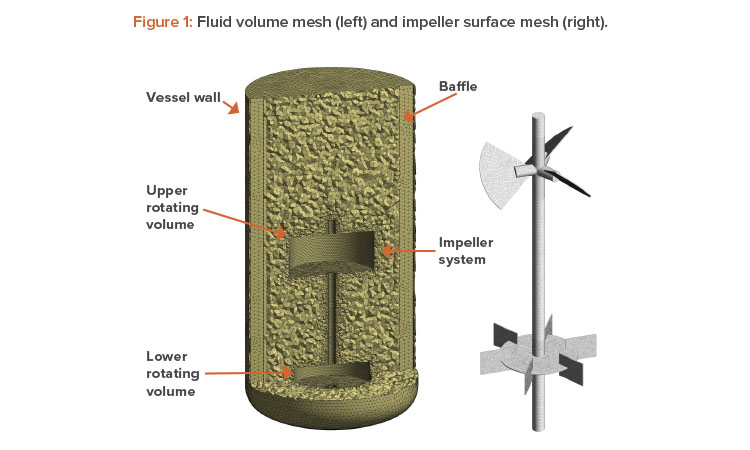 For this study, a sparger-exit air density of 1.662 kg/m3 was calculated. This density was used to compute the initial mass of the bubbles exiting the sparger. For the compressible gas model, ANSYS automatically calculates the changing density within the vessel due to pressure variations.

An unstructured mesh using tetrahedral elements was used with mesh inflation. The final mesh parameters were set by performing a mesh independ-ence study on the volumes surrounding the impellers, and literature available in the public domain was used to set the vessel mesh. Figure 1 illustrates the mesh used for final simulations.

The mesh included inflation layers at solid surfaces and was adjusted to provide an area average y+ value of approximately 30. Three inflation layers were used, with a default growth rate of 1.2 (i.e., successive inflation layers are 20% thicker). The y+ values were monitored individually for the top impeller, bottom impeller, and vessel. The mesh independence study performed by Sarkar and colleagues3 was leveraged for the nonrotating vessel mesh. This reference achieved mesh independence with 1.24 million elements for a computational fluid dynamics model that contained three impellers. Within our study, the static vessel volume alone was meshed with approximately this number of elements (1.2 million elements), so it was assumed that mesh independence was achieved for the vessel volume; this approach is considered conservative. If one wished to speed up the solver progress, it might be possible to coarsen the nonrotating vessel mesh and still get accurate results. Although we did not perform a mesh independence study on the static vessel volume, a mesh sensitivity study was performed on the rotating impeller volumes using setup 2 (incompressible gas model with second-order pressure-velocity coupling) for simulation 3 (see Table 2, later in the article, for operating parameters). Table 1 shows the results of this study.

*kLa shown is based on using a 0.4 constant.

Three mesh sensitivity runs were performed, which included increasing the mesh density of the individual impellers by approximately 70% when going from run 1 to run 2 and again when going from run 2 to run 3. From the various outputs (e.g., kLa, torque) shown in Table 1, it seemed that mesh independence was achieved with the mesh of run 2, although the torque seemed to move up with each run. In reality, the torque, as well as many other parameters, fluctuated in a tight range, and there was no significant difference in torque when the fluctuations were considered.

The kLa values for the individual (impeller and vessel) volumes and for the overall volumes were tracked throughout the solver run. The overall kLa shifted higher from run 1 to run 2, but it remained approximately the same from run 2 to run 3. The kLa displayed evidence of monotonic convergence, where the difference in kLa between runs 2 and 3 was negligible and much smaller than the difference between runs 1 and 2. It is unlikely that further mesh refinement would change the kLa value; thus, it was assumed that mesh independence had been reached.

For conservatism in subsequent simulations:

Figures 2 and 3 show the air volume fraction and oxygen transfer rate distributions, respectively, for all final simulations. The differences between the noncompressible and compressible second-order pressure-velocity coupling runs are not as significant as the differences between the fourth-order and second-order pressure-velocity coupling runs. This is not surprising because fourth-order numerics will capture more detail. The air volume fraction figures (Figure 2) show evidence that flooding occurred for simulation 1, which was operating at 25 RPM and 200 NLPM (see Table 2) because the impellers were not properly dispersing the gas phase; regions in blue contained little to no gas.

We tracked all imbalances, and most equation classes bounced around an imbalance of zero. Typical computational fluid dynamics guidance suggests that all imbalances are less than 1% before a solution can be considered converged; however, for these simulations, this was not possible because it was typical for some equa-tion classes to bounce around at ±5%.

In all the simulations, the steadiness of various output parameters (e.g., forces, kLa, gas holdup) was tracked for a prediction on convergence. A time-step size no larger than 0.01 seconds was used for all final simulations, although one must initially use a much smaller time step (such as 1E-5 sec) to avoid crashing the linear solver. This time step is then steadily increased up to 0.01 seconds as the solution progresses. The time step acts as a relaxation factor for steady-state ANSYS CFX simulations, and one may have to experiment with it for each unique model. 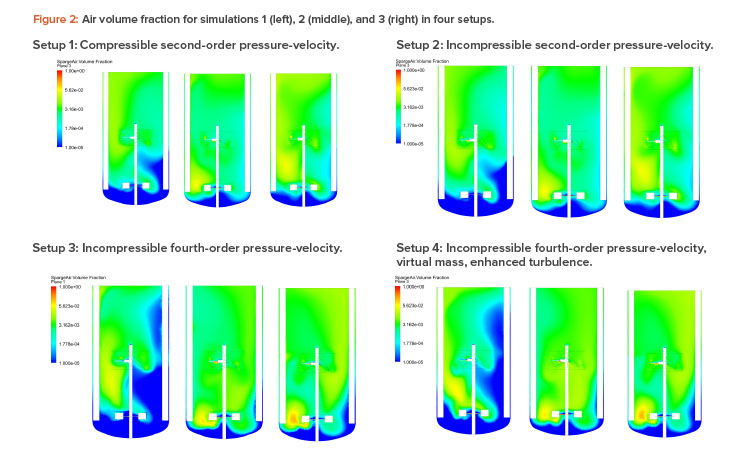 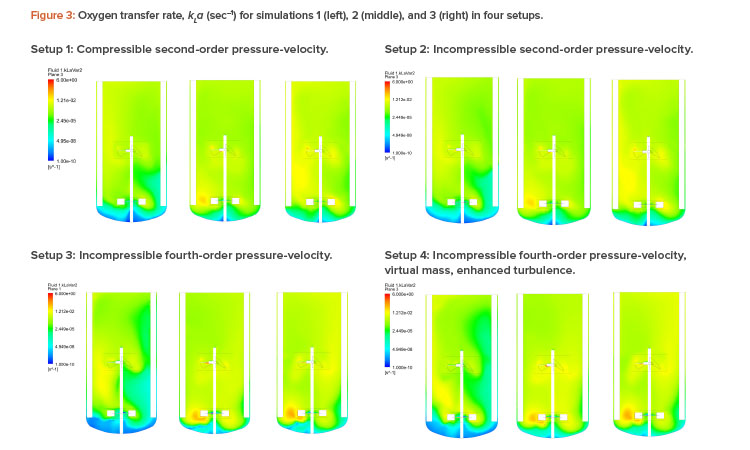 After discovering setup 4 (i.e., incompressible, fourth-order pressure-velocity coupling, virtual mass, enhanced turbulence) provided for the most accurate results, we applied this setup to a completely different bioreactor, which had a different working volume, dual-pitched blade impellers, and a different gas sparger design. A mesh independence study for this bioreactor was not performed. Instead, this bioreactor was meshed with a total of 2,548,980 elements using a similar mesh-sizing approach as the previous bioreactor model. The bottom impeller volume was meshed with 563,407 elements, the top impeller volume was meshed with 591,214 elements, and the vessel was meshed with 1,394,359 elements. The predicted results were similar in that kLa was predicted accurately (within 16%), this time using a kLa constant of 0.4 from the benchmarked case. Table 2 shows the computational fluid dynamics versus experimental data for both bioreactors.

Although experimental data were used for benchmarking, applying this method (i.e., setup 4) does not require experimental data if the purpose is to determine what operating conditions (i.e., impeller speed and sparge rate) will maximize mass transfer for a fixed-system geometry. One can just use a kLa constant of 0.4 (or any other reasonable value) to gauge the relative difference in performance between operating conditions. The method described here shows that good computational fluid dynamics results are achieved even for a flooding scenario and with high residual values, as long as the various variables of interest have shown a plateau.

The results of this study demonstrate that computational fluid dynamics can be valuable for predicting bioreactor mass transfer performance and for optimization purposes, provided the model is setup appropriately.

Special thanks to Dallan Seah and Paresh Gigras for providing support and insight. We would also like to acknowledge and thank Mrudang M. Shah, PhD, PPM, of ADVENT Engineering, for supporting CFD technology. This research did not receive any specific grant from funding agencies in the public, commercial, or not-for-profit sectors. 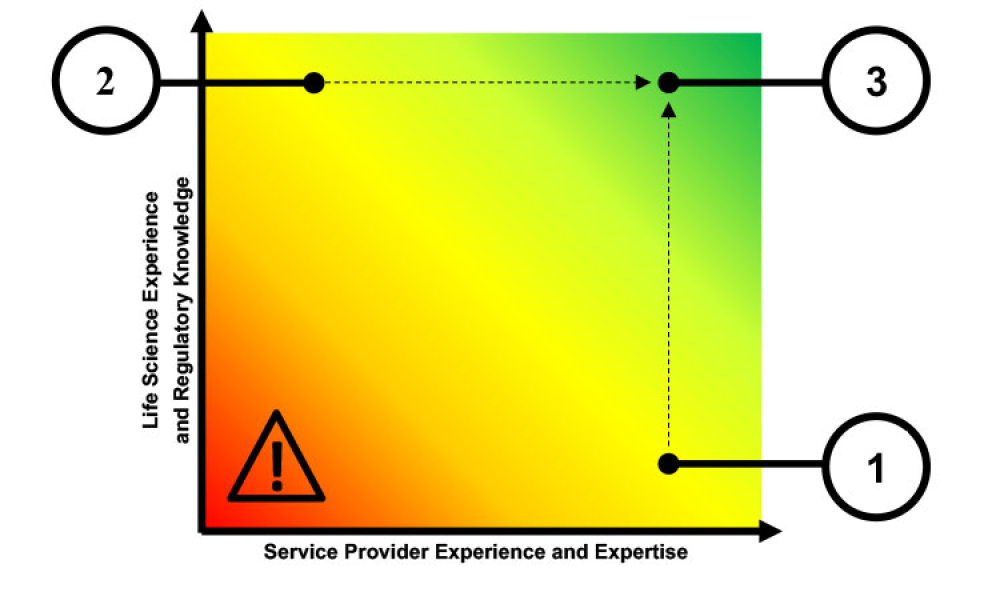 Technical
Software as a Service: The Journey to Becoming a Life Sciences SAAS Provider
1 November 2021
Use of software as a service (SaaS) applications within the life sciences industry is growing. This article reviews the issues and challenges faced by SaaS providers and identifies the qualities of successful providers for this highly regulated industry. 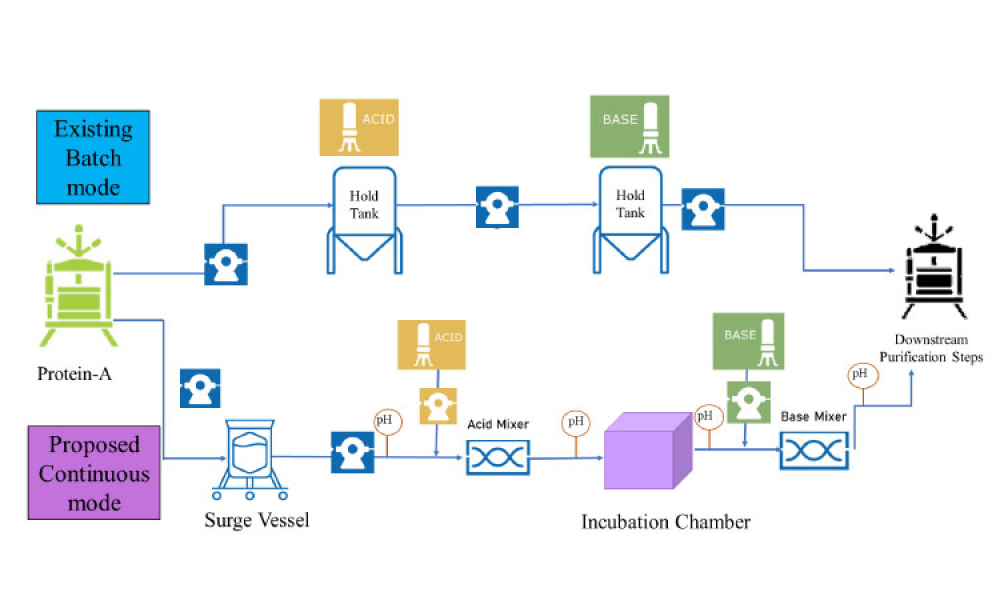 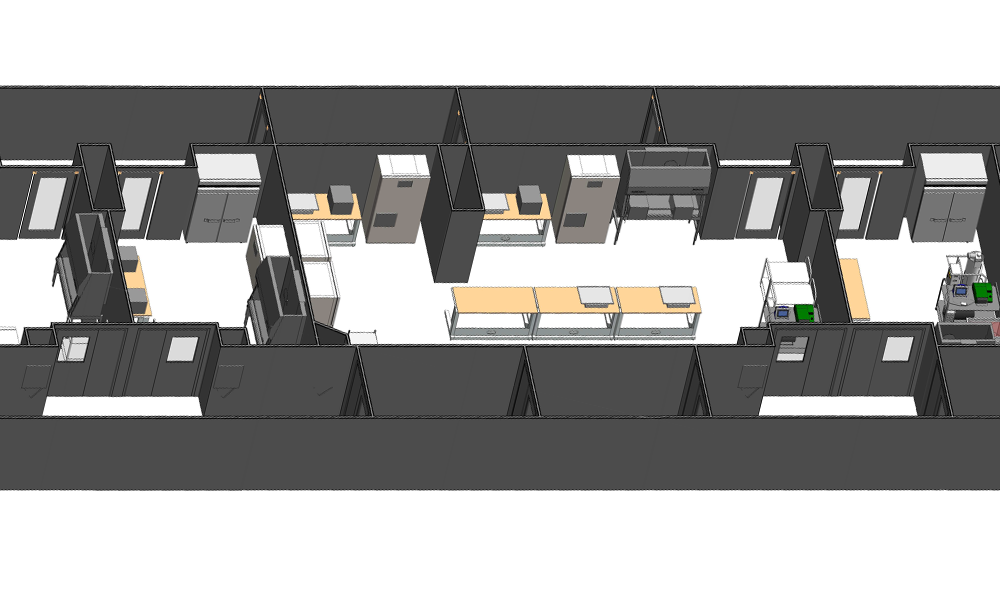