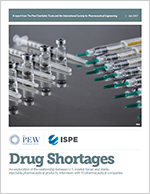 As part of their ongoing commitment to patients, ISPE and The Pew Charitable Trust, supported by PricewaterhouseCoopers, conducted a collaborative research project to understand the market forces and other dimensions which impact companies’ decisions over how they react to potential or actual shortages.  The study examined the relationship between manufacturing, supply chain and US market forces and how they contribute to the shortage of sterile injectable products. The study also assessed the elements that influenced the decisions companies made to reduce future shortages. 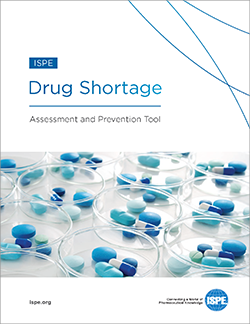 The ISPE Drug Shortage Assessment & Prevention Tool provides manufacturers across the spectrum of the bio/pharmaceutical industry with methods to locate current and future inconsistencies across the pharmaceutical manufacturing supply chain. By using this tool, manufacturers will mitigate problems before they arise allowing them to provide an uninterrupted supply of safe, quality medicines to patients worldwide. The tool will assist manufacturers in evaluating their current processes, systems and practices and assess the risks in the six different dimensions compared with a ‘desired state’ as described in the ISPE Drug Shortages Prevention Plan. In addition to analyzing potential gaps in their organization supply chain, use of the tool will also help manufacturers prepare for any questions a regulator may ask concerning their ability to avoid a potential drug shortage or manage an actual shortage. 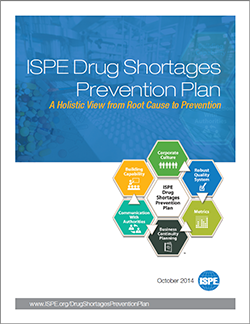 The ISPE Drug Shortages Prevention Plan is an actionable plan intended to help the pharmaceutical and biopharmaceutical industry avoid drug shortages that result from manufacturing and quality issues. The Plan is based in part on ISPE's groundbreaking 2013 Drug Shortages Survey which investigated manufacturing quality issues as a major cause of drug shortages. The Plan is organized into six dimensions, and contains recommendations and real-world case studies in each of these dimensions. The Plan builds on this data and incorporates significant follow-up input from stakeholders on how drug shortages can be prevented.

Prevention of Drug Shortages Based on Quality Manufacturing Issues 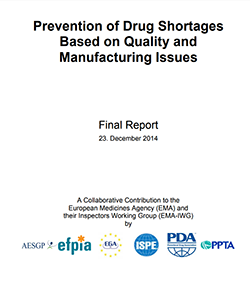 ISPE’s Drug Shortages Prevention Plan formed part of an inter-association response to the European Medicines Agency’s (EMA’s) request to industry to provide solutions to the global problem of drug shortages caused by manufacturing. 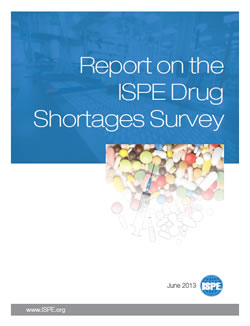 In 2013 ISPE launched a comprehensive electronic survey to individuals working in the pharmaceutical industry to gather data on the technical, scientific, manufacturing, quality and compliance issues that have resulted in drug shortages. The intent of the anonymous survey was to better understand the underlying issues and possible root causes of drug shortages. With well over 100 items in several branches of inquiry, the survey was complex and time-consuming. ISPE limited the scope of the survey to the technical and GMP compliance related issues the ISPE Drug Shortages Team suspected might be contributing to drug shortages. ISPE’s goal in collecting this survey data was to provide the pharmaceutical industry and health authorities with scientific data to support the development of risk-based approaches, using modern quality systems, to mitigate and prevent drug shortages.

Initiatives & Programs A to Z