ISPE announced that CEO and President John Bournas was recognized as a top-10 Industry Influencer on The Medicine Maker’s 2017 Power List. The UK publication’s Power List celebrates 100 individuals “involved in bettering the pharma industry and bringing life-changing medicines to market” across four categories. 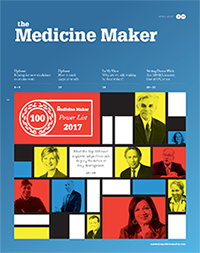 Bournas ranked seventh in the "Industry Influencers" segment. He was recognized for developing ISPE’s global initiatives and business operations, leading organizational efforts in solidifying working relationships with international regulators, and spearheading global initiatives such as the Drug Shortages Prevention Plan. Seven ISPE members were recognized on the 2017 Power List overall, including Andy Skibo, former ISPE Board Chair, and Jim Breen, ISPE Board Secretary.

“When I see the names of Andy Skibo and Jim Breen, two of ISPE’s guiding beacons, on the same list, I feel humbled as well as honored with this recognition,” said John Bournas, ISPE CEO and President.

The Medicine Maker Power List recognizes 100 pharmaceutical professionals across four categories, each made up of 25 noteworthy professionals—and each with its own top ten: